Gustavo Villanueva’s career in AISD began at Clack Middle School where he taught Spanish for three years followed by an additional three and half years at Abilene High School. His career as an administrator began at Madison Middle School where he served as an Assistant Principal for four and half years and then served as the Principal of College Heights Elementary School and Craig Middle School. Most recently he served as the Administrator of Instruction at Abilene High School before becoming Executive Director of Secondary Education in January 2016. Mr. Villanueva holds both a bachelor’s and master’s degree from Abilene Christian University. Having grown up in Mexico, east Texas, and central Texas, Mr. Villanueva has lived in Abilene since 1993. He is married to Micaela Villanueva, who serves as the campus secretary at Bonham Elementary. He has two children – Jocelyn, a graduate of AISD, attends Abilene Christian University and Cristian is a student at Abilene High School. 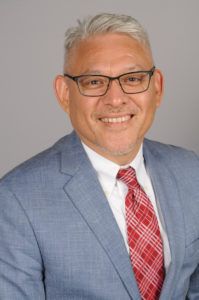