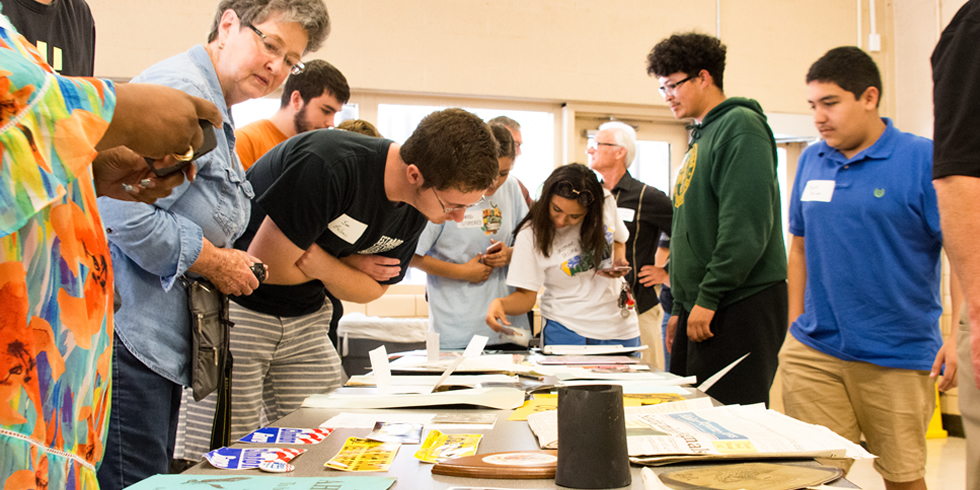 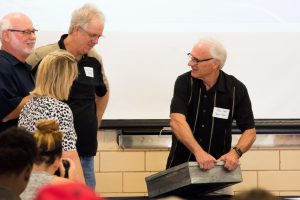 The opening of the Time Capsule on October 21, 2017 was a time of celebration and remembrance. We had special guests come in from out of town and out of retirement to be with us as we opened the contents. Mr. Royce Curtis, former Principal of AHS, provided remarks about the Time Capsule and the creation of the Bryant Wing.  Mr. Dennis Townsend, former Department Chair of Social Studies, acted as the emcee for the event and described all of the items as they were extracted from the container.

The contents of the Time Capsule were displayed for the current student body of AHS on October 23-24 in the foyer of the auditorium. Each Social Studies teacher was asked to escort his/her class to the auditorium and allow the students to view the contents.

The items are now on display in the Bryant Wing display cabinets on both the first and second floor.  They will remain on display until the end of December.  Some of the memorabilia included a “Hecklers” t-shirt, a paper fan from Crystal’s pizza, predictions of what life would be like in 2017, slang from 1992, and coins and stamps.

Time Capsule #2 is already in progress. Each of the current 16 Social Studies teachers will be asked to participate in providing an item to be placed in the new capsule which will be opened in the Fall of 2042. Included with these 16 items will be the Bryant Family crest as well as pictures from 1992 and 2017.

Personally, I have three students whose parents were students in 1992 and one whose grandparent was a principal in 1992. Upon going to the auditorium, they found a picture with their family member in it. I allowed them to pick it up and took a current picture of them holding the picture of their parent/grandparent.  Those will most certainly be included in Time Capsule #2 with identification as to who is in the picture and graduating class information explained on the back of the picture. The new items will be submitted by December 8.  The new Time Capsule will be installed before the Fall semester concludes.

I am constantly reminded that it is truly “A Great Day to be an Eagle!”— John McCabe, former Social Studies teacher and coach.