Four years ago, Madison Middle School orchestra director Candi Ice introduced an opportunity for her students to go beyond what a typical middle school orchestra student could accomplish. 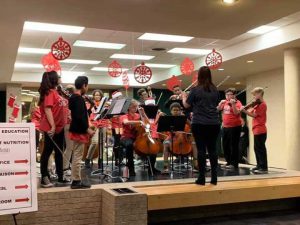 Inspired by her students’ interest in the high school preforming group Revolution Strings, Mrs. Ice offered her students a chance to perform in Viva Strings.

“Viva Strings allows orchestra students an opportunity to perform alternative styles of music that are not often performed in a traditional orchestra setting,” Mrs. Ice said

Mrs. Ice holds rehearsals on Friday afternoons and encourages any student who is interested to attend and give Viva Strings a shot.  At rehearsals, the members of Viva Strings are pushed almost beyond the limits of their musical ability as they learn to perform new arrangements in preparation for upcoming concerts and events.

This hard work and commitment has paid big dividends for the young men and women of Viva Strings as invitations to perform have been coming in from several groups around Abilene.

Viva Strings has played for audiences at City Sidewalks and Cajun Fest over the last two years.  However, their biggest performance comes each year at the String Fever spring concert. At this district-wide orchestra concert, the young men and women of Viva Strings are given the opportunity to showcase their talents for all of AISD.  For Sting Fever, the students learn high school level arrangements and have the opportunity to play with Revolution.

Madison Middle School is proud of the hard work and commitment of Mrs. Ice and the young men and women of Viva Strings. They truly represent Madison in the best way!