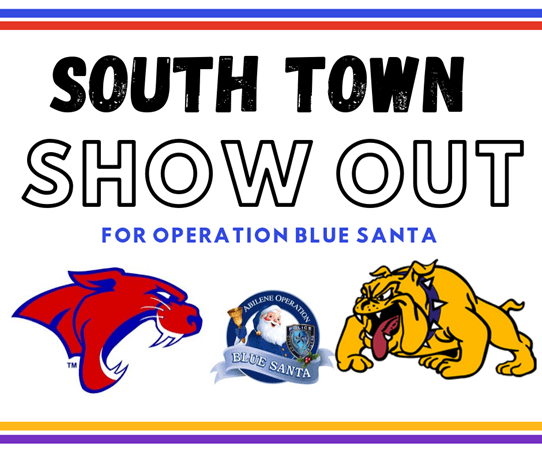 ABILENE – While the Cooper Cougars and Wylie Bulldogs are battling on the turf at Shotwell Stadium during Friday night’s Southtown Showdown, fans of both teams will be asked to donate to a cause that will benefit underprivileged children in Abilene as part of what’s being called the “Southtown Showout.”

Beginning Tuesday and continuing through at least Friday’s game, fans can donate to a Go Fund Me page with all funds going directly to the Operation Blue Santa project. Prior to the kickoff Friday night, members of the student councils at both Cooper and Wylie will make a ceremonial donation to the Abilene Police Department, which operates Operation Blue Santa in conjunction with the Abilene and Wylie school districts.

Operation Blue Santa is a non-profit organization founded by Abilene Police Officers in 2015.  Their mission is to enhance relationships in the community we serve by giving back during the Christmas Season to in-need or at-risk children.  Children are recommended by teachers, school counselors, and school resource officers in the Abilene and Wylie Independent School districts.