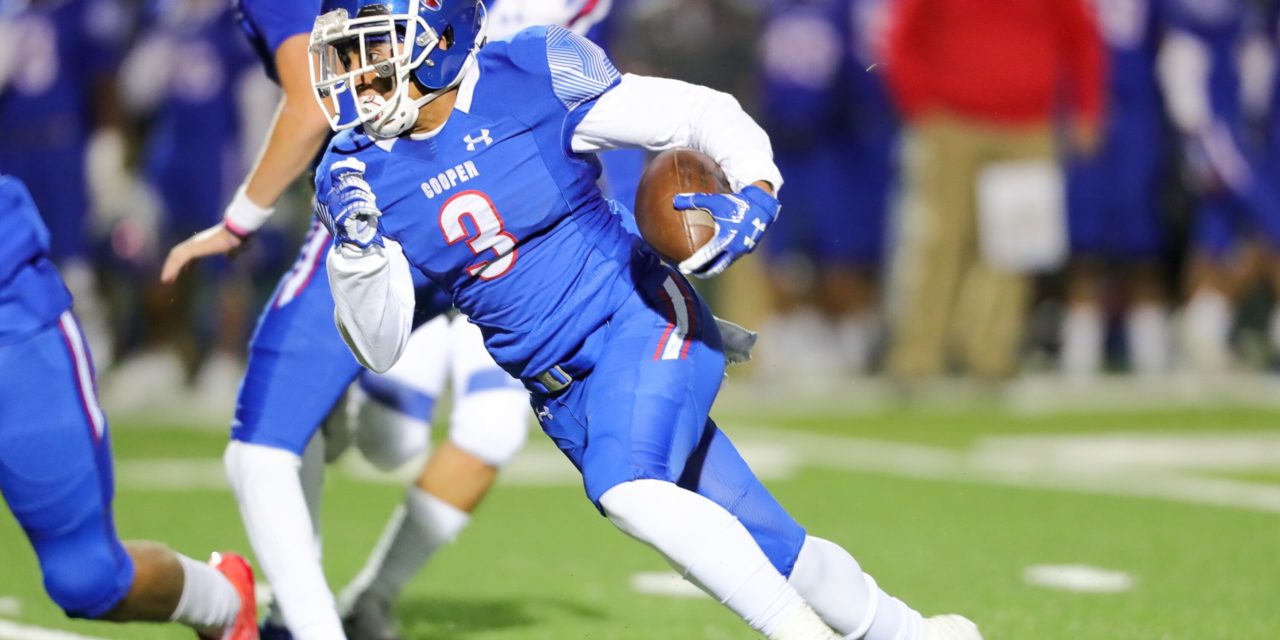 ABILENE – As we cruise toward Thanksgiving, there’s a lot going on in AISD Athletics, chief among them Friday night’s football showdown in Amarillo between Cooper and Amarillo High to determine the District 2-5A Division I champion.

The Cougars are 9-0 overall, 5-0 in district play and ranked No. 8 in the latest Class 5A state rankings. The Sandies, meanwhile, are 7-2 and 5-0 and coming off a 65-20 demolition of Lubbock High last Friday night. Cooper, meanwhile, is rested and ready after enjoying a bye week last Friday. Cooper has been off since Oct. 25 when it manhandled Lubbock High, 49-14, in a game they led 49-0 at halftime.

Cooper has now reached the playoffs in 13 consecutive seasons dating back to 2007 under three different head coaches (Mike Spradlin, Todd Moebes and now Aaron Roan), but is looking for its first outright district championship since winning the District 4-4A title in 2009. The Cougars tied for district titles in 2010 (District 3-5A with Abilene High), 2014 (District 4-5A with Lubbock Cooper and Plainview), and 2016 (District 4-5A with Lubbock Coronado).

The site, date, time and ticket prices for the Cougars’ bi-district playoff game will be announced late Friday night or early Saturday morning after the conclusion of the Cooper-Amarillo and Del Valle and Chapin games. Stay tuned to AISD’s Twitter account for up-to-date information.

• The Abilene High tennis team just completed a terrific season last week, although it ended with a tough 10-9 loss to Flower Mound Marcus in the Region I-6A tournament semifinals at Rose Park. The Eagles – ranked No. 13 in the state and coached by Stacy Bryan – won the District 3-6A championship on their way to a 23-8 record on the season.

• The Cooper volleyball team – led by head coach Nora Campbell – saw its season come to an end Tuesday night with a four-set loss to Canyon Randall, the #2-ranked team in Class 5A. The Lady Cougars won the first set, 25-19, before Randall bounced back to win the final three sets, 25-16, 25-18, 25-19. Cooper finished its season at 19-23 after finishing tied for third in District 4-5A.

• Not long after the completion of the 2018 high school cross country season, director of athletics Phil Blue and the two high school cross country coaches – Lanny Prentice (boys) and Rosemary Martin (girls) at Abilene High and Lalo Munoz (boys) and Kelly Garcia (girls) at Cooper – sat down and put together a performance improvement plan aimed at bettering performances by all four teams in 2018.

The plan worked as both Abilene High teams captured District 3-6A championships on Oct. 15 at the district meet, hosted by AHS in Abilene. Jasmin Mendez was Abilene High’s top-finisher on the girls’ side, finishing in fourth place, while Dieu Biama, Brock Scoggin and Daniel Garcia finished third, fifth and sixth, respectively, in the boys’ race. At Cooper, both teams finished second at the District 4-5A meet in Wichita Falls behind state powerhouse Aledo with Simona Hamilton finishing third in the girls’ race and Daryck Shields finishing sixth on the boys’ side.

• The high school basketball seasons begin Friday night as both the Abilene High and Cooper girls tip off their respective campaigns. The Lady Eagles will host Wylie at Eagle Gym with the varsity tipping off at 6 p.m. (JV and freshman games at 4:30 p.m. each), while Cooper is on the road at Lubbock High for a game starting at 6:30 p.m.

The Cooper boys get their regular season started next Friday (Nov. 15) at 6 p.m. when they play in Lubbock against Amarillo Palo Duro in a neutral-site contest, while Abilene High opens the same night against old district rival Midland High at Eagle Gym at 7 p.m.

• The Craig Middle School 8th grade volleyball teams were nearly unbeatable in 2019 as the Colts’ A, B and C teams finishing a combined 35-2 on the season and winning all three city championships. All three teams won their individual tournament championships and combined to win their final 34 consecutive matches.