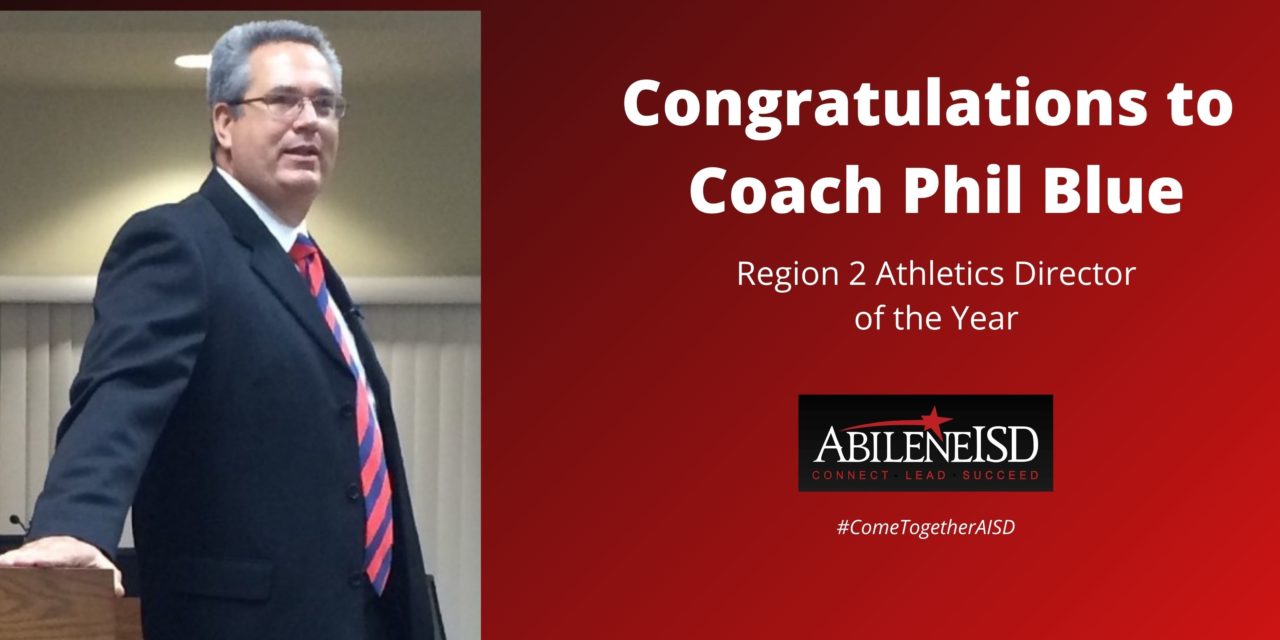 ABILENE – Phil Blue, who is in his sixth year of service to the Abilene ISD as the Executive Director of Athletics, has been named the Region 2 Athletics Director of the Year by the Texas High School Athletics Directors’ Association. Blue will be recognized as the regional winner at the THSADA conference in Round Rock in June.

Blue joined the AISD administrative staff in May 2015 after serving as the Executive Director of Athletics for the Grapevine-Colleyville ISD for one year (2014-15). He was also the Director of Athletics at Georgetown ISD from 2005-2014. Under his leadership, high schools from Grapevine-Colleyville ISD and Georgetown ISD consistently finished in the top 10 of the UIL Lone Star Cup standings.

“This is a tremendous honor, especially because it comes from my peers within the Texas High School Athletics Directors’ Association,” Blue said. “I have so much respect for the men and women across the state who serve as directors of athletics, and that’s what makes this award so humbling.”

“Phil Blue has put together an outstanding career as a coach and administrator, and he is certainly deserving of this honor,” AISD Superintendent Dr. David Young said. “To be a regional Athletics Director of the Year is a significant accomplishment.”

Blue was a two-sport standout for Greenville High School, quarterbacking the football team to an undefeated regular season in 1980. Blue earned five letters and earned all-district honors in football and basketball and in 2016 he was inducted into the school’s Athletics Hall of Fame.

Blue was earlier named quarterback of Greenville’s 1980s all-decade team. In basketball, he was a three-year starter and all-district guard. He also was named Outstanding Senior for the Class of 1981 by the Greenville High School faculty.

Blue went on to play quarterback at Texas-Arlington under coach Chuck Curtis, earning three letters and leading the Mavericks in total offense in 1984. He served as head football coach at Georgetown, Farmersville, Mineral Wells, Quinlan, Celeste and Texas Christian Academy in addition to a stint as offensive coordinator at Abilene High.

“Coach Blue has had a great impact on my career as a coach and athletic administrator, said Del Van Cox, Abilene ISD’s Assistant Director of Athletics. “I have been lucky enough to work for and with Phil on three different occasions during my career. Phil has a love for kids and competition and is passionate for helping coaches improve.”