ABILENE – Mikalia Bradberry knew from an early age what she wanted to do with her life, and her dogged pursuit of that dream through Cooper High School and Abilene Christian University has her now living in Minnesota pursuing a career on stage and screen.

The 2013 graduate of Cooper graduated from ACU and recently earned her Master’s in Music (Vocal Performance) from the University of Minnesota, graduating with a 3.9 grade point average. 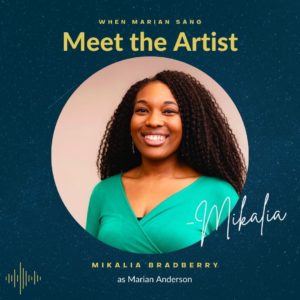 “I realized at a young age that I loved to sing and that I wasn’t afraid to do so,” Bradberry said. “My mom has always been so supportive of my singing and both my parents blessed me with the opportunity to grow up knowing Jesus Christ. God has given me the wonderful opportunity to share His gift with people so I can point them back to how great He is.”

Born in Oklahoma City, she received her Bachelor of Music in vocal performance from ACU before receiving her master’s at Minnesota. A mezzo-soprano, Bradberry’s operatic highlights include Carmen in La Tragedie de Carmen and Madame de Croissy in Poulenc’s Les Dialogues de Carmélites for the University of Minnesota, as well as preparing for the role of Lucretia in Britten’s The Rape of Lucretia for An Opera Theatre in Minneapolis (the production was cancelled because of COVID one week before it opened).

In addition, she recently performed the role of Nia in Lyric Opera of the North’s Decameron Opera Coalition submission, The Place and soloed for Minnesota Chorale’s recent concert “BRIDGES: Black Voices Amplified.” She is the winner of St. Croix Valley Opera’s vocal competition of 2021 and is scheduled to perform in Mississippi Valley Orchestra’s presentation of Prokofiev’s Alexander Nevsky in May of 2022.

She is a teaching artist for An Opera Theatre in Minneapolis and also has the pleasure of serving on the DEI committee for Opera Oriented Projects of Minnesota.

Aside from all of that, she is currently working on a project about the life of Marian Anderson, the renowned operatic contralto who broke racial barriers and famously sang on the steps of the Lincoln Memorial in a 1939 concert organized by Eleanor Roosevelt after being denied access to the whites-only Constitution Hall.

Bradberry will portray Anderson in the title role in the live, read adaptation of the book “When Marian Sang,” the same title of the award-winning children’s book. She didn’t audition for the role in the production, which will be released in April, but instead was selected to portray Anderson by the directors of the Opera Oriented Projects of Minnesota (OOPS).

“The Vice President, Christina Christensen, came up with his idea from speaking with her sister, a teacher, about the children’s book When Marian Sang,” Bradberry said. “Her sister didn’t feel comfortable singing the excepts that are included in the story to her class and the idea was born. This project is specifically for young children, so I’ll be reading the book and singing the musical pieces that are included in a couple of different settings. I’ll even get to portray Marian at her Lincoln Memorial performance. Being part of this is such an honor.”

Shooting for the project begins in the spring so she is in the middle of preparations now, learning music. As she’s learned more about Anderson, she sees parallels in their life stories.

“She was determined to sing as am I, despite the obstacles,” Bradberry said. “While I haven’t had the exact same struggles as Marian, I know what it’s like to move through the world as a Black woman, to come into contact with people who don’t want you to succeed because of your skin color and otherwise, and to work really hard to be successful in this industry. I also see myself in her because of our faith in God. I believe every good thing comes from Him, including this opportunity.”

As she looks back on her days in the Abilene ISD and at ACU, Bradberry can’t help but thank those instructors who encouraged her, bringing out her talent and setting her off on her career path.

“I’m so grateful to all of my music educators from the AISD, starting with Kay Fowler and Carolyn Newman and going through Laura Grametbaur, Dianne Hawley, and Cara Naizer,” Bradberry said. “I’m also thankful to (ACU director of choral activities) Dr. Jeffery Goolsby for his commitment to being such a great music educator for the community. And I most definitely wouldn’t be where I am without (former ACU voice professor and vocal division chair) Dr. Julie Pruett.”

While working on the Marian Anderson project, Bradberry will also be singing with the Mississippi Valley Orchestra in their presentation of Sergei Prokofiev’s Alexander Nevsky, saying, “It’s time for me to dive into some Russian!”

And like everything else in her young career, Bradberry will put everything she has into conquering that challenge.