Former Abilene High School running back Abram Smith had hoped to hear his name called at some point during the 2022 NFL Draft. Yet, despite setting the Baylor single-season rushing record in 2021 and leading the Bears to the Big 12 championship, he wasn’t among the 262 players selected over the three-day event April 28-30.

When the draft ends, NFL teams get to work recruiting and signing undrafted free agents to fill out their rosters in preparation for rookie mini-camps in May and training camps later this summer. Smith was part of that frenzy as he began fielding calls from teams during the late stages of the seventh and final round of the draft.

He quickly worked out a deal with the New Orleans Saints after the draft ended and will be on the field at the team’s headquarters in Metairie, La., May 13-15 for rookie mini-camp. Smith will join a Saints team that is led by new head coach Dennis Allen, who took over after Sean Payton resigned following the 2021 season.

The Saints could be looking for help at the running back position in 2022 as they enter the spring and summer with Alvin Kamara and Mark Ingram topping the depth chart. Kamara is going through legal issues this spring and Ingram is entering his 12th NFL season and is nearing the end of the line.

Tim Brando, a native of Louisiana and college football broadcaster for Fox Sports, called several Baylor games last season and likes Smith’s on-field style and what he might bring to the Saints. He was recently on Sports Talk with Bobby Hebert, Kristian Garic, and Mike Detillier on WWL Radio in New Orleans and talked about the characteristics that might separate Smith from other NFL running backs.

“He runs like a guy that wants to hit a defender like a defender,” Brandon said on the show of Smith, who spent two seasons playing linebacker at Baylor. “He invites the contact, and most running backs don’t do that. That’s what makes him so tough. And once he gets to the second level, he’s got big-time speed. I did a few of their games last season (2021), and he was impressive. He carried them in some games because their quarterback play was questionable, and I believe he saved their season in a lot of ways.” 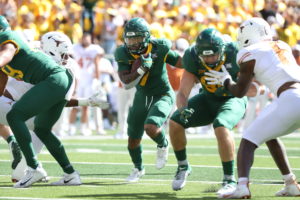 The 2021 season was record-breaking for the All-Big 12 second-team selection. In his only season as Baylor’s starting running back, he set the program’s single-season rushing record (1,621 yards), set the program record for 100-yard rushing games in a single season (nine), and led the Bears to Big 12 and Allstate Sugar Bowl championships. The Bears wrapped up their 2021 season with a 12-2 record – one of the best seasons in program history – and most of it came on the back of a player who bounced from running back to special teams to linebacker and, finally, back to running back during his career at Baylor.

Smith signed with Baylor as a running back coming out of AHS in 2016. He is the Eagles’ all-time leading rusher and second-leading rusher in AISD history with 5,019 yards, and he also has the program’s record for TDs (73) and the record for the longest run (99 yards vs. El Paso Americas in the 2016 playoffs).