This year’s edition of the Children’s Art & Literature Festival is the 10th year the Abilene Cultural Affairs Council has helped introduce the city’s children to fine arts through reading and art.

Now known best as CALF, the 2022 event is scheduled for June 9-11 at venues throughout the downtown area. Once again, it will feature the Storybook Parade, Winnie’s Remarkable Garden Party, music, a petting zoo, train rides, dramatic readings, science experiments, workshops, time at Frontier Texas! and the Abilene Zoo, and more.

In the first nine years of CALF, the program has expanded to 19 venues, and each year a new addition to the Storybook Sculpture Project – nearly 40 pieces at this point – is unveiled. The collection of storybook characters is the largest of its kind in the nation, fitting for the Storybook Capital of America.

The ACAC plans the festival with the help of arts partners, generous sponsors, and hundreds of volunteers. The yearly theme is based on the artist on exhibit each summer at the National Center for Children’s Illustrated Literature (NCCIL), and this year that artist is Sophie Blackall.

Blackall is an Australian artist and illustrator of children’s books who is based in Brooklyn, New York. She won the 2016 Caldecott Medal for Finding Winnie: The True Story of the World’s Most Famous Bear and the 2019 Caldecott Medal for Hello Lighthouse. She has illustrated more than 50 books for children, including the Ivy + Bean series, which is being adapted into family films by Netflix. Sophie wrote and illustrated her most recent book, the humorous tale Negative Cat.

“The goal of each festival is for kids to fall in love with books and art and be creative,” said Sidney Levesque, Marketing Director for the ACAC. “We hear so many great stories about kids leaving CALF and going home and creating their own costumes and writing their own books and plays. The sky is the limit when you put your imagination to work.” 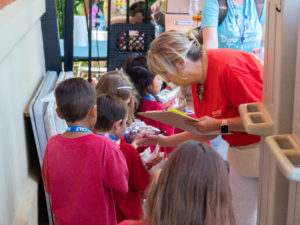 The festival depends on hundreds of volunteers to make the three-day event work, and many of those are employed by Abilene ISD. Levesque uses those AISD volunteers in several capacities, including helping organize parts of the festival, dramatic readings, science experiments, and in other areas as needed.

One of those volunteers is Denise Brunner, the district’s Lead Elementary Library Supervisor, who has been involved with CALF since its first year in 2012. She has helped recruit librarians to work at the festival, and she is also a reader of dramatic readings. Brunner has helped distribute CALF flyers to elementary and pre-school librarians, which helps reach thousands of Abilene families.

She and her colleagues have also developed lesson plans for the designated illustrator’s books and taught those in their campus libraries in conjunction with the school’s TEKS and library objectives.

“It has been amazing to see how this program has grown over the years,” Brunner said. “We watched as more and more people and downtown locations took part in the activities.  Every year new organizations have joined the program and Abilene ISD was a large part of that growth. Our Fine Arts program participates with musical groups. Suzy Kehret began developing S.T.E.A.M. activities for their S.T.E.A.M. lab, and Beth Pruitt developed and maintains the Goose Chase program (scavenger hunt) for participants to document the fun.”

Brunner, however, enjoys the dramatic readings as much as anything else, partly because it allows her true self to come out. 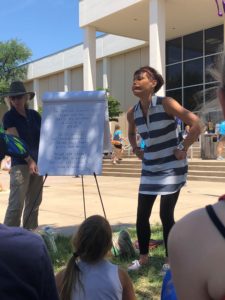 “I’m a Mayhall, and anyone who knows my family, knows we are natural hams!” she said. “I love to read to children and don’t get to do it often since I moved into an administrative role in 2012.  Encouraging children to read is a personal goal as well as a professional one.  It’s a thrill to turn a child (or an adult for that matter) on to a great book.

“I taught students in the classroom for eight of my 38 years in the business, and part of that was teaching them to read with expression and feeling,” Brunner said. “People should feel a definite connection with a book when it is read to them. My goal is to capture their attention and surprise them with something exciting in the text and/or illustrations.”

The idea behind the S.T.E.A.M. Room at the Center for Contemporary Arts is that each CALF book inspires a station in the room with scientific experiments.

“Suzy reads all the books and then comes up with the station themes and decides what supplies are needed,” Levesque said. “She also uses her own time to oversee the S.T.E.A.M. Room, which starts during Group Day Thursday and lasts until Saturday afternoon. Some of the experiments are then loaned to AISD for science teachers to use in their classrooms. It’s a super partnership between AISD and CALF.”

Meredith Adams, an art aide at Ward Elementary School, is involved in both art and literature at CALF, leading both art and reading lessons during her time at the festival. 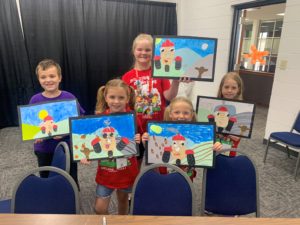 “I love being a part of the CALF festival because of my passion for art and literature,” Adams said. “Both play a very important role in my classroom as I have the pleasure of teaching and seeing how it fills and encourages my students. It’s even better to see their excitement grow when they attend the festival. They hear stories, play games, step into a storybook or painting, sing songs, make crafts, and become art themselves. The CALF festival allows kids to not just make art and literature, but to experience it.

“Last year, I read Nightsong, illustrated by Loren Long, and children crawled into a ‘cave’ to hear the story. Another year I read Jangles by David Shannon from the ‘belly of a giant catfish.’ It’s thrilling to see the faces of kids and adults light up. And as an art teacher, I feel in my element and encouraged to take it all back to my classroom.”

For Adams, the most important takeaway from each CALF festival that she’s been part of is how the community supports the endeavor.

“I have been a part of almost all of the festivals, and I feel honored to read among some of the most talented people in our community,” she said. “I love getting to support and work with one of my favorite organizations, Young Audiences. They coordinate all of the readers and roles for the festival. They offer an opportunity to do more of what I love – read, perform, and make art. I think the CALF festival is a beautiful picture of our community.”

Melody Kern, who is an ARD facilitator for AISD, has for the last several years taken on the task of organizing and executing the Storybook Parade, a project very close to their family.

“My husband and I have been involved with the festival since it started,” Kern said. “My husband has installed several of the storybook statues, including the very first ones, the Dr. Seuss characters, at Everman Park. I feel very strongly about promoting literacy and believed this was an excellent opportunity for the children in our community. I volunteered to help with the parade and was happy to become the project manager for the parade shortly after that. I also love that our community supports literacy. The dramatic readings and opportunity for our children to spend time in downtown Abilene are wonderful.”

In addition to the involvement of AISD librarians, fine arts specialists, and others in the festival, AISD Student Nutrition has also become a part of CALF, helping to feed students on Thursday as one of its lunch stops that day.

“As CALF Group Day on Thursday started to grow – which includes daycares and summer camp programs – Abilene ISD Student Nutrition offered to make that day one of their lunch stops in Abilene, which has made a tremendous difference,” Levesque said. “Some of the groups, like Boys and Girls Club, were having to leave the festival at lunchtime and missing the afternoon programming to go back to their place to eat the free meal. So, we were so happy when AISD offered to make Group Day lunch a feeding place. They feed about 700 people in one hour and they do a super job setting everything up. Any child can stop and eat the free lunch, and it allows all of the groups who come to stay for the full day of programming.”

For Levesque, the festival is the perfect opportunity for students to tap into their creative side while providing a glimpse into the cooperation of the Abilene community.

“The goal of each festival is for kids to fall in love with books and art and be creative,” she said. “We hear so many great stories about kids leaving CALF and going home and creating their own costumes and writing their own books and plays. The sky is the limit when you put your imagination to work.

“And, of course, we love working with AISD teachers and staff to put on the festival,” Levesque said. “They are so great with kids and know how to connect with them on their level. We appreciate how much AISD supports the festival, from the librarians distributing CALF flyers to the AISD Print Shop creating the city water bill inserts. I love how much Abilene collaborates to make this project such a success.”

The CALF Festival needs your help! If you would like an opportunity to volunteer at this amazing community event, please visit the links below.

Volunteer for the STEAM Room: https://www.signupgenius.com/go/10c0e4dabaf23a6fcc07-steam