It didn’t take former Abilene High School softball coach Jim Reese long to know he had something special the first time he saw Alyssa Washington step on the AHS field.

“After one practice, you knew she was different,” Reese said recently. “She had great fundamentals, did everything well, and she was so strong and athletic. She’s one of the three or four best players I ever got to coach (along with three-time World Series champion John Lackey and former catcher Chris Churchill, both at Abilene High).”

Reese coached Washington for three seasons (2018-20) and was part of the recruiting process that eventually saw his star shortstop signing with the University of Texas. Washington was a key part of the Texas team that reached the championship series in June against No. 1 Oklahoma in the Women’s College World Series in Oklahoma City, Okla. 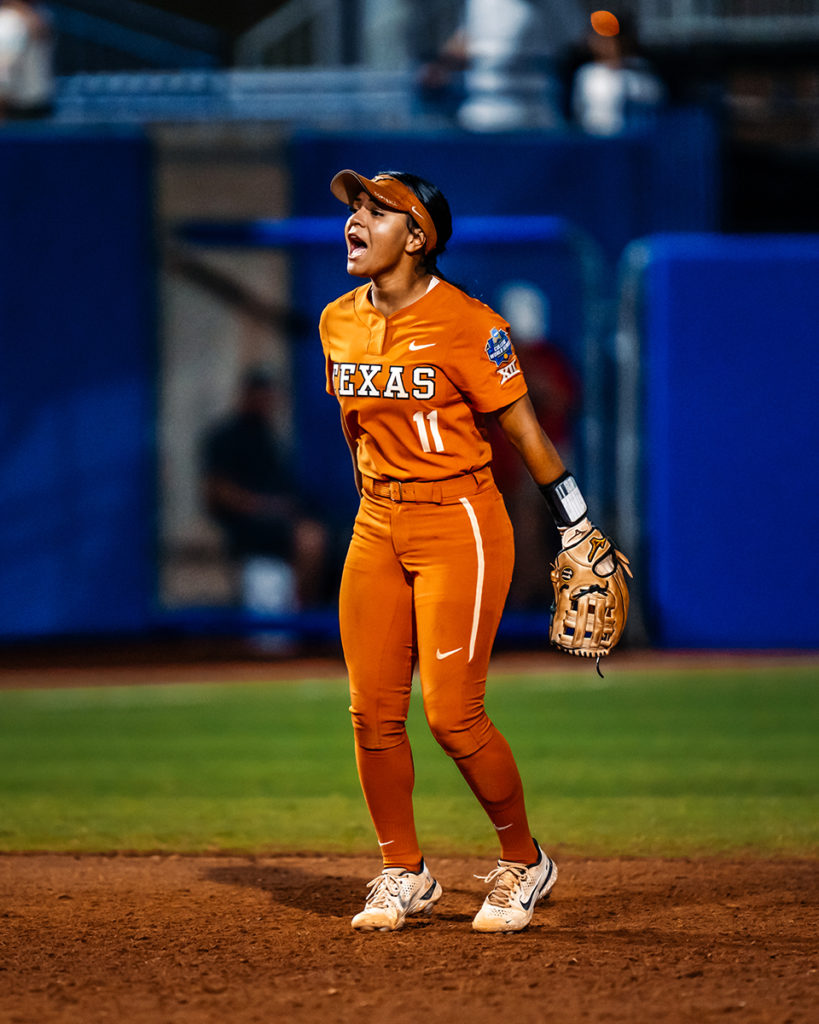 Texas finished the season 47-22-1 overall (12-6 in the Big 12), won the Washington Regional, and beat Arkansas in three games in the Super Regional. The Longhorns then played back through the loser’s bracket in the world series before finally falling to the Sooners, who won their second straight national title.

While the season didn’t end the way they envisioned, the Longhorns’ national runner-up finish in the program’s first appearance in the WCWS championship series certainly qualifies as a successful campaign. And it all came on the heels of a six-game losing streak early in the season that included going 0-5 in a mid-February tournament in Clearwater, Fla. That’s when the team’s season turned around, Washington said.

“We lost a lot of seniors from the 2021 team, and it took us a little while to get everyone focused together,” Washington said a few days while visiting Abilene following the end of the Longhorns’ season. “We knew going into the season that we would be an underdog all year, and that kind of put a chip on our shoulder, and that helped us play for each other.

“The beginning of our season was rocky, and we took some punches in Clearwater,” she said of the Longhorns, who returned to Texas with only a 5-6 record after losing to Florida State, Auburn, UCLA, Central Florida, and Notre Dame. “We weren’t as prepared for those games as we should have been, but what they showed us was that we had the pieces, but we had to work hard. We just had to learn each other and how to play together, and we believed that if we did that we could be special.”

After that tournament, the Longhorns ripped off 15 wins in their next 18 games, and that 15th win was a 4-2 victory over Oklahoma on April 16 in the finale of a three-game Big 12 series in Austin. The win by the Longhorns snapped OU’s 40-game winning streak that stretched back to the end of the 2021 championship season. The Sooners started the 2022 campaign 38-0 before falling to Texas.

“Our main thing throughout the season was that we weren’t playing the jersey in the other dugout; we were just playing another team,” Washington said. “It didn’t matter what team we faced; we knew if we played our game and followed our game plan we were capable of beating anyone. When we beat OU, we played our game, and that was the key for us. That win gave us a lot of confidence over the last six weeks of the season.”

The Longhorns earned an at-large berth in the NCAA Tournament and went to Seattle, Wash., for the region tournament where they won their first two games to earn a spot in the final. After losing the first game to No. 11 Washington on Championship Sunday, the Longhorns held off a Washington rally to win the decisive championship game, 3-2.

Texas then went to Fayetteville, Ark., for the Super Regional where the Longhorns beat fourth-ranked Arkansas in the three-game set, taking the last two games 3-1 and 3-0 to earn the program’s sixth berth in the WCSW and first since 2013.

“Being on the field in Oklahoma City was a very surreal feeling,” Washington said. “I remember going to the World Series in Oklahoma City when I was 12 years old and just looking at the players and dreaming of playing there one day. I remember watching (University of Alabama great) Jackie Traina pitch, and that fired me up because it made me want to be on the field one day. It was a dream and I didn’t know if I could reach it.”

But she did, and on June 2 she took her customary position at shortstop to help the Longhorns in their first-round game against No. 5 UCLA. The Longhorns dominated from the start, winning 7-2, setting up a rematch with Oklahoma.

“Just to step on that field against UCLA – a team you always see in the World Series – was amazing,” said Washington, who was 1 for 4 with a run scored and RBI in the win. “I was so proud to be there and to represent my family and everyone who’s been a part of this journey with me.”

The Sooners then avenged the regular-season loss to Texas with a 7-2 win that featured a two-run home run by OU standout Jocelyn Alo, the two-time National Player of the Year who finished her career as the leading home run hitter in NCAA history. The loss knocked Texas into the loser’s bracket where they won three straight elimination games – one over Arizona and two against fellow Big 12 member Oklahoma State – to earn the right to play OU in the championship series.

The wins over Oklahoma State were especially meaningful considering Texas was 0-4 against the Cowgirls before the WCWS. After winning the first game they needed to win to stay alive, the Cowgirls and Longhorns met one more time for the right to play OU in the championship series.

The Longhorns trailed 5-3 in the top of the fifth but took advantage of two errors on the same play that plated three runs to push them in front, 6-5. Texas ace pitcher Hailey Dolcini made it stand up, sending the Longhorns into the championship series.

“We had played them several times during the season, and we knew them pretty well,” Washington said of Oklahoma State. “Kelly Maxwell (Big 12 Pitcher of the Year and a member of Team USA) is an amazing pitcher, but we locked into our game plan and came out on top.”

The mountain the Longhorns had to face in the championship series was monumental: an Oklahoma team that many observers said after the WCWS might have been the greatest collegiate softball team in history. Certainly, it had the best offensive player in collegiate softball history in Alo and her teammates exploded for 26 runs in two games to claim the national championship.

Even though OU is Texas’s main rival, Washington said being on the field against the Sooners and Alo was a privilege.

“OU has a great team,” she said. “They have amazing athletes 1 through 9 in the lineup and on the bench. Jocelyn Alo is just an amazing player, and being on that stage and playing them and watching her end her career the way she did … I’m thankful for all of it. I know the outcome wasn’t what we wanted, but I’m incredibly proud of the season we put together.”

With the loss of six Longhorn starters – including All-American second baseman Janae Jefferson – Washington is primed to be one of the leaders of the 2023 Longhorns, a task she’s already preparing to tackle. She’ll return to Austin in early July to begin working with the strength and conditioning staff, preparing to lead her team back to Oklahoma City for another shot at the program’s first national championship.

“I’m ready to be a leader,” she said. “I’ve always been a lead-by-example player, but I know that with the number of players we lost I’ve got to become more vocal. I know with all of the younger girls we’ll have that leading vocally will be crucial to our success next year. I have to take a big step in 2023, but I’m excited about that and I’m preparing and doing everything I can to make that leap.”