The next Summer Olympic Games are two years away, but Abilene High School head boys basketball coach Justin Reese spent part of his summer coaching the Olympics in Florida, and he earned a gold medal for his effort.

Reese – approached earlier this year to coach basketball at the Special Olympics USA Games in June in Orlando, Florida – spent time in March in San Antonio at a training camp where he and his assistant coach for Team Texas met their team. He then spent 10 days at Disney’s Wide World of Sports Complex in Lake Buena Vista, Florida, coaching his team to a gold medal. 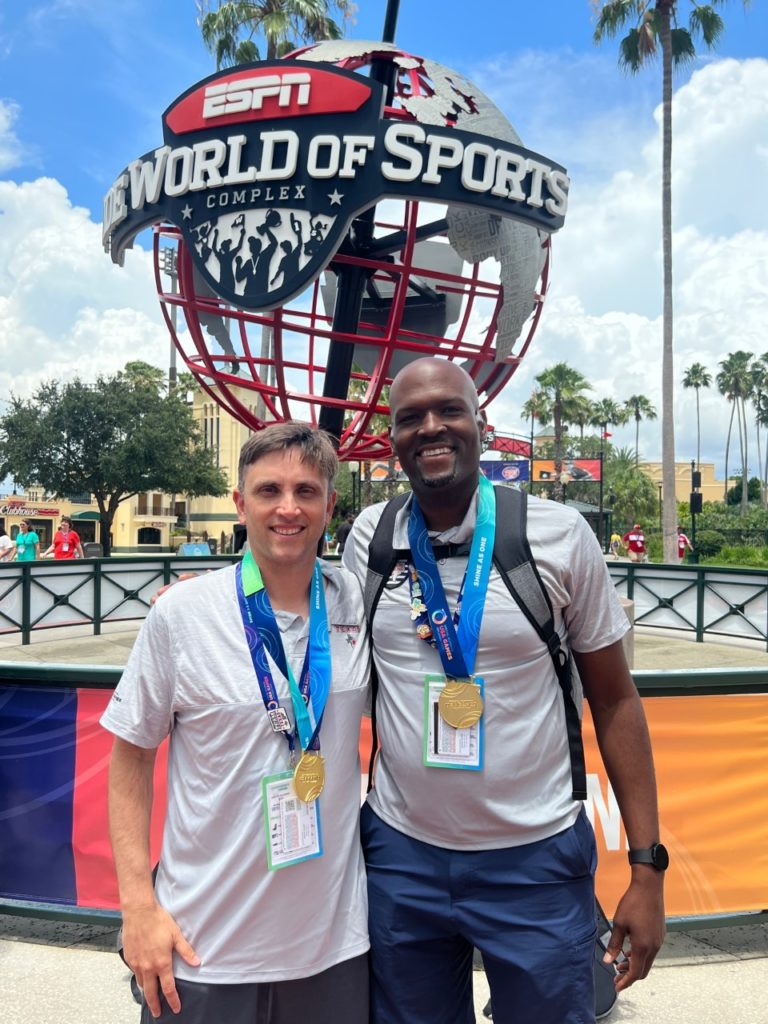 Reese’s assistant for Team Texas was Brandon Osborne, the executive director of the Abilene Youth Sports Authority, and the two of them were recruited to coach the team by Bobby Reeves, the West Region Executive Director for Special Olympics Texas who lives in Abilene.

Not long after Reese and Osborne agreed to coach Team Texas, they spent a March weekend at Morgan’s Wonderland Camp in San Antonio, meeting and coaching their team.

“We had a lot of fun that weekend,” Reese said. “We worked on some things and got to know our guys. I think we were both a little bit surprised at how good they were athletically. We had some really good players and there was a wide range of skills among those players. We had to figure out a role for everyone to play and what they could do well to help our team win.”

Between the end of the training camp and the time the group went to Orlando in early June, the team kept in touch via a group text, which Reese said is still going strong more than a month after the games ended.

After pool play early in the tournament, the teams were divided into three brackets based on skill level with Team Texas being assigned to the middle bracket. Reese’s team beat Team Alaska, Team Louisiana, and Team Arizona to win the gold medal in its division.

“We knew this was a big deal to our kids, but Brandon and I are fortunate that we do this for a living and we’ve both played in and coached in some big games,” Reese said. “But when we knew we were going to win the gold medal and the clock was ticking down, it quickly became apparent how important this was to those kids. They were crying tears of joy and that’s when it hit us both what a lifetime moment this was for those kids.”

That’s just one of the lessons Reese said he has taken away from the experience.

“Brandon and I both talked about what lessons we would take from this experience, and I think on the court we learned – as simple as this sounds – to keep everything simple,” he said. “We spent the first couple of games doing a lot of coaching and telling guys whom to guard and where to go, and it kept our team from playing loose. We needed our kids to not think too much and we needed them to compete and enjoy the game and know that we supported them 100 percent. Once we figured out the more you simplify it the better it is for everyone, we took off.”

But it’s off the court where Reese said he learned the most important lessons.

“We spent a lot of time together at the parks, at practice and games, and at the resorts where all of the athletes stayed, and it was a blast,” he said. “We can learn so much from these kids. They’ve never had a bad day, and I mean never. They never feel sorry for themselves, and they don’t think about any of the disabilities they have. And it’s 100 percent, unconditional love. From the beginning of training camp to right now, as soon as they know you’re their coach, you’re their coach for life, and they’re in with you 100 percent.”

Reese, who said he would be up for another turn at coaching a team in the future, said some of those lessons learned will be passed on to his AHS team this year and those in the future.

“You know, the one thing I think about is just to make it a little bit simpler,” he said. “When your kids aren’t thinking too much, know what your mission is, and know that you as their coach 100 percent have their back, they know then they have the freedom to play loose and confident. All of us in the coaching profession can get better at that.

“The other thing would be to have an attitude of gratefulness. We get to be part of this program at Abilene High and enjoy playing together. We should be grateful every day we get to do that.”