Click here to nominate someone for inclusion on the Veterans Memorial Wall
Two years ago, when the Abilene ISD began thinking about a way to honor former students and employees who served their country and have since passed away, a small committee was created to help determine the best way to memorialize those men and women.

And on the morning of Nov. 11, the AISD, students at Dyess Elementary School, and guests from across the community gathered at Abilene’s newest elementary school to celebrate the completion of Dyess Memorial Park. The park – which features the United States Air Force’s F-4D Phantom II fighter jet – is home to a black granite wall that for now contains the names of 77 AISD students and employees who met the criteria and were nominated by family and friends to have their names and associated military branch etched into the granite. 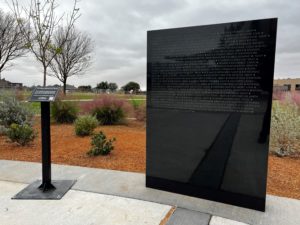 The sudden winter-like weather moved the morning ceremony inside, but that didn’t keep some members of the crowd from making their way to the park afterward to see the names of their loved ones or friends in the granite. Mike Newton, who retired after a 43-year career in education that included the last 13 of that as the principal at Dyess, said the addition of the memorial park only strengthens the bond between the school, the community, and the Dyess Air Force Base, which opened in April 1956.

“It’s a blessing to remember those who fought and many who died for this country,” Newton said. “The relationship between Dyess Elementary School and Dyess Air Force Base is critical. I’ve been to Punchbowl National Cemetery in Hawaii and the Vietnam Wall in Washington, D.C., and each of those places is very moving. To have a place locally where people can go and have that same experience is so important.”

Janaye Wideman, in her first year as the principal at Dyess, spoke to the audience about her military background: both of her parents, her grandfather on her father’s side, and her mother’s twin sister who all served in the U.S. Air Force, making her service at Dyess and the ceremony even more poignant.

“When they were needed, they were there,” Wideman said of her family. “Though not always easy, they were there. Our veterans, past and present, go above and beyond the call of duty daily so that we maintain our freedom and keep our land and borders secure. When they are called, though not always easy, they are there. Today we recognize our veterans for their amazing sacrifice and especially recognize the family, friends, and loved ones they leave behind while serving. We salute each of our troops, near and far. Thank you for your service to our nation.”

The Dyess student leadership team, Student 2 Student, led the crowd in both the Pledge of Allegiance to the United States and the Texas Pledge, while the 5th grade Honor Choir, under the direction of veteran music teacher Alan Jones, sang two selections for the crowd, including “God Bless America.”

In addition, AISD Superintendent Dr. David Young – who came to Abilene as an elementary student in the 1970s because his father was assigned to Dyess AFB – spoke, as did Col. Joe Kramer, the Commander of the 7th Bomb Wing.

The wall – which will continue to be updated as new names are turned in to the district – carries the name of 77 people who met the criteria set forth more than two years ago by a committee that began working on the memorial park project. One of those names is the name of US Army Sgt. Reuben Marcus Fernandez III, a 2004 graduate of Cooper High School killed in action in Iraq on Oct. 11, 2008.

His cousin, Ruben DeLaGarza, served on the committee with Dr. Young, Associate Superintendent for Operations Scott McLean, and a few others, and DeLaGarza said the memorial wall will be a source of pride for Abilenians.

“I am so proud that we have come together and created a place where we can gather and tell the stories of the veterans who have come through AISD,” DeLaGarza said. “With the strong military presence in our community, this is long overdue. Loved ones and friends alike can all gather here to share the stories of their veterans and we can keep their memories alive. It’s satisfying knowing that we can do that at Memorial Park. I’ve said it before that our soldiers die twice, once when their heart stops beating and again when we stop telling their story. We now have a sacred place at Memorial Park where we can continue telling our stories.”

Several members of the DeLaGarza / Fernandez family were in attendance, and after the ceremony, they went out to see the name of their family member in the stone.

“Seeing Marcus’s name on the wall brought out so many emotions,” DeLaGarza said. “I think of him daily and I miss him dearly. A bit of sadness creeps in because it’s a reminder that he’s gone, and I can’t see him or speak to him until we meet again. The wall represents closure and finality. Seeing his name on the wall means his name and his legacy will live on way after I’m gone from this earth and that does bring comfort. As long as his name is spoken, and his story is being told he will never die that second death. We take that responsibility very seriously in our family.”