THANK YOU FOR VISITING THE ABILENE ISD
2013 BOND PROJECTS WEBPAGE!

In November 2013, voters in Abilene ISD overwhelmingly approved an $87.68 million bond package to address numerous facilities needs throughout the district. Among the 10 projects included in the bond are safety/security upgrades at every campus, replacement of three aging elementary schools and the consolidation of the Early Childhood program.

A Citizens Master Facilities Planning Committee identified the 10 projects it deemed the highest priorities to be addressed in the bond package. After voters approved the issue, a sub-committee of the Master Facilities Planning Committee, called the Bond Oversight Committee, was formed. Six members, plus two officers of the larger group, make up the committee. Members will meet regularly to learn details and ensure that the original committee’s recommendations are being followed. The committee held its initial meeting on March 3, 2014.

Work on the bond projects began in Spring 2014, and all of the construction and upgrades are expected to be completed within four years. By the beginning of the 2017-18 school year, all three new elementary schools and the newly expanded Early Childhood Center should be open.

The purpose of this webpage is to keep the public updated on the progress of the 2013 Bond projects. Over the next several months until the completion of all projects, this site will provide timelines, Oversight Committee documents, construction updates and photos of ongoing work from actual building sites. If you have questions, a link is provided that allows you to send your questions directly to the district so administrators may promptly provide an answer. 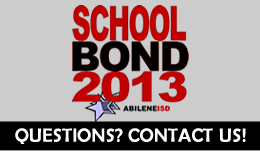