IMPACT Award winners recognized by Board of Trustees

ABILENE – Eduardo Jimenez certainly left an impression on everyone in attendance at Monday night’s Abilene ISD Board of Trustees meeting, showing up at One AISD Center with his ever-present smile and humble attitude, not to mention with a sombrero and guitar so he could serenade board member Daryl Zeller on his birthday. 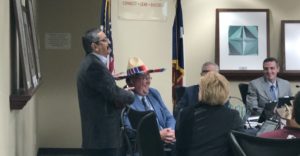 Jimenez was one of three AISD employees who were honored at Monday’s meeting as the first winners of the IMPACT Award, a new designation announced at August’s Convocation meeting by superintendent Dr. David Young that would honor employees who go above and beyond expectations both in their jobs and away from their places of work. The plan is to honor three employees – one professional, one para-professional and one auxiliary – four times a year for their work in the district.

Jimenez is the lead custodian at Austin, and he was the first auxiliary employee to win the IMPACT Award. He was joined Tuesday at One AISD Center by Cooper special education teacher Elba Nieves and Long Early Child Care aide Michele James as the other two winners of the award. Each of the three was surprised on their campus on Oct. 31 and told of the award, and then Monday night they were presented with a check from the AISD and First Financial Bank and a plaque commemorating the event.

But it was Jimenez who stole the show Monday night, pulling out his signature sombrero and guitar and leading the assembled crowd in singing “Happy Birthday” to Zeller, something he does almost daily for students and staff at Austin.

“Thank you” was the word most commonly used among all three winners of the award when speaking to the board Monday night, but their campus principals were overflowing in their praise for their co-workers.

“Eduardo is such a joy to be around,” Austin principal Alison Camp said on the day he was surprised on campus. “He does things he’s not asked to do; he’s never not working.”

And, “Elba is compassionate, kind, loving, and consistent in serving some of our most precious students in Abilene ISD,” Cooper principal Lyndsey Williamson said.