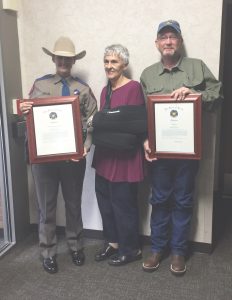 Reed Tate, a bus driver for Abilene ISD, was honored recently in Austin by the Texas Department of Public Safety for his life-saving action last summer while on vacation. Mr. Tate witnessed a major vehicle accident near Fredericksburg, and his quick and decisive actions contributed to saving the life of the driver.

For his heroics, the Texas Public Safety Commission awarded Mr. Tate, a retired fire fighter, with the Director’s Award during a ceremony on Oct. 25 in Austin. He also will be honored by the AISD Board of Trustees at the Dec. 10 Regular Meeting.

Below is the accommodation that was provided at the DPS ceremony: