Bill Enriquez was appointed to the Abilene ISD Board of Trustees in January 2016. He has lived in Abilene all of his life and attended Fannin Elementary, Mann Middle School and graduated from Abilene High School. He received his degree in Business Administration from McMurry University. He is self-employed in automotive and real estate sales.

Bill has been an active volunteer and mentor in AISD for many years. He has served on many Abilene ISD committees and task force groups. He is a past president of two PTA’s and has served on campus parent advisory boards, leadership teams and role model mentor programs.

His community involvement is also extensive as he has served on the Abilene Philharmonic Board, Abilene Chamber of Commerce, Development Corporation of Abilene, Hispanic Leadership Council, Hispanic Business Committee and several others. In 2015, Bill was honored as the Volunteer Citizen of the Year by KTXS-TV and West Texas Utilities.

Bill’s wife Tina is a Reading and English teacher at Clack Middle School. They have two children that attended Abilene schools – Rick who is an X-ray and CAT Scan technician, and Heather, a Registered Nurse. They have five grandchildren who have attended or are currently attending AISD schools.

Bill truly cares about the Abilene ISD students, teachers and support staff and will work hard to do what is best for our school district. 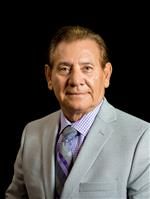